A downloadable game for Windows

NOTE: This game is now in development under the name Max Attack, which you can follow the progress of in the devlogs, twitter, discord, and youtube. The downloadable version below is for the original, prototype version only!

This download only contains a single track and car with no damage and unlimited race time. Xbox controller is highly recommended, but keyboard will suffice. There's no music included, but feel free to hum an appropriate song if one comes to mind while you drive...

You'll be playing an early gameplay/visual prototype, but I'm hoping to get some feedback on the controls, camera, feel, etc. now to help guide the development of the game. Please feel free to comment below and be sure to check out the devlogs if you're interested in following along with the progress as it happens. Thanks for playing!

It would be better if you added a cpu to race with you just saying the game is great though!

I had no idea you had a playable prototype. It's really freaking fun for as stripped down as it is.  Can't wait to see what comes of this!  :D

oh ya, this version is practically ancient now :)

Is this game still happening, I'm only asking because it has been silent for two months. I really don't want this games to fade away into nothing.

Still working on it, just haven't been posting here much. Twitter is probably your best bet to stay up to date on the project!

Who else has been here since 26k started this game, or am I the only one? (At least one of the last ones to comment)

Edit: I just found out there was one from around 5 years ago. So now the question is, who has been here since the beginning of this version?

Can you make a Mac version, please? That would be great.

Hey, I hope to at some point! I don't have a mac to develop on so I feel a bit weird putting a version out there completely untested, but I'll figure out something down the road...

Sorry for the late comment, but there are Mac emulators for Windows and Linux that you can use to test this game on. I know this because of me trying the emulators out, but that was a while ago on my old computer and I forgot what I used.

This is impressive, it really captures the speed factor and the handling feels so nice, I will surely keep an eye on this project.

Just for the record, I know this was meant to be played with an Xbox Controller but I only have a DualShock4 so I played it that way and discovered something because of a funny accident: the A button and Steering are both linked to the left stick, so I had the precision in both steering and acceleration (I guess you used Input.GetAxis instead of GetAxisRaw?) and that allowed me to take the turns better and with less loss in speed. Hopefully I explained that right.

My recommendation for future iterations would be to  change the acceleration from the A button to the RT (or some other ranged input) or maybe allow a remap in the settings menu to let the players choose their preferred way of playing.

Keep it up! You have a great project in your hands :)

Thanks! Ya, the plan is to have full remap available in the future but I hadn't put too much thought into giving precise analog control of acceleration like that as an option... interesting, I'll have to give that a try!

thanks for playing, definitely more to come!

This is very, very fun! I find myself going back to best my time, then realize I've been doing laps for 20 minutes. I think you've got something here, hope it turns into a bigger project (or at least gets leaderboards! :D)

Awesome to hear and I'm  hoping it turns into something bigger as well, heading that way now...

Put this on mobile, Android first

Maybe one day, focusing on PC for the immediate future.

I loved it! It was very enjoyable. I played the practice level for over an hour straight. I really liked the steering system, and that feeling of timing your acceleration around corners. Overall, the handling felt very smooth and precise. One thing I would recommend is a best lap record, but I know it's still in prototype. The aesthetics were also very nice and the track was a lot of fun to play. Thank you so much and keep on developing.

Thank you for playing and I'm really happy you're digging it! It's great to hear folks enjoying the controls, it's the #1 reason this prototype exists. Lap and race records are definitely in the works right now.

Reply
Over Game3 years ago(+2)

Nice game. I like the simplicity, movement, and the polished graphics of your game. I think one thing to work on is adding breaks. Maybe to add some more fun, you can add turbo boosts.

Thanks! Agreed on boosts, something I'm looking to add in the future in one form or another

Very nice, it has potential.

Any chance of an OSX version? I would like to have a try. :)

Okay, I've given your game a little bit of a shot, and I think I have a few things to say.
I think the idea of letting go of the accelerator to help steer is a little bit flawed. Maybe you could implement an air brake system of sorts. As an  Example, LT would help you steer left and RT would help you steer right while pressing both will slow you down for the more delicate steering areas.

There's also a long stretch of road that the finish line is on. It allows the player to get to the max speed of around 235MPH, and if I crash at this speed, I kinda just bounce off the wall like a rubber ball. Not sure how hard this'll be to fix, but eh. Now you know.

Thanks for the feedback! Agreed about the collision stuff, especially at high speeds and perpendicular angles the kickback and slowing could be greatly increased. I do want to leave some room for using the side rails strategically, but ya it's too rubbery right now!

In terms of the braking, I've been thinking about trying out a dedicated brake button at some point, but I want to see if it makes sense to have different cars handle drastically different first. I like your idea of assisting the turns tho, kinda like the F-Zero lean buttons.

Another great game to get inspiration from is Wipeout! They're kinda similar to F-Zero, but I'm not very familiar with F-Zero.

The prototype is so polished! It's really good. :)

Thank you for playing! 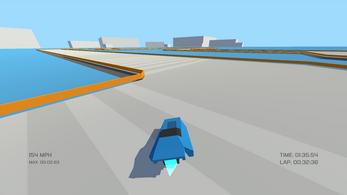 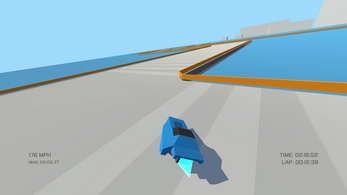